This is Sun Devil Baseball

To be a part of the Sun Devil Baseball program is to be a part of excellence. It is five national championships, seven College Baseball Hall of Famers and more than 20 College World Series appearances. It is be an elite legacy that has fostered more than 100 Major Leaguers including Barry Bonds, Mike Leake, Oddibe McDowell, Reggie Jackson, Dustin Pedroia, and Andre Ethier. It means leadership on the field, in the classroom and around the community. 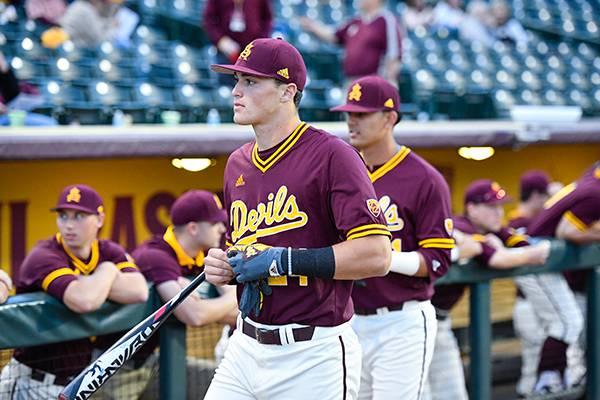 Arizona State University and the City of Phoenix partnered to make Phoenix Municipal Stadium the home of Sun Devil Baseball beginning at the start of the 2015 season.

Sun Devil Athletics will honor the baseball program’s storied tradition through a variety of ways, including increased signage and branding as well as creating a Legacy Walk that will feature permanent plaques for our three former head coaches and the foundation of the program, increased use of historical photos and video, and added emphasis on our strong ties with Major League Baseball, USA Baseball and the College World Series.

Sun Devil Baseball is unrivaled when it comes to getting its student-athletes to the professional level. The 108 players to have gone to the Major Leagues from ASU is the most in the NCAA since 1959. The Sun Devils have now had at least one major league player on their varsity roster each year from 1961 through 2013, which is the longest current streak in the nation with several players from more recent seasons looking to make their MLB debuts in the near future. Numerous superstars have worn the Maroon and Gold, including Barry Bonds, Mike Leake, Oddibe McDowell, Reggie Jackson, Dustin Pedroia and Andre Ethier.

Sun Devil Baseball operates in an environment in which athletes don’t focus solely on their sport, but on their futures as well. For the first time in school history, the baseball team recorded an Academic Progress Rate (APR) in the top-10 percent nationally and joins Stanford as the only two schools in the Pac-12 to achieve this mark.

With help from the Office of Student-Athlete Development, players not only earn their degrees during their playing days, but those who turn pro before graduation are afforded the opportunity to return and finish what they started. 14 student-athletes graduated have graduated in the past two years, while more than 20 players have returned and obtained their degrees since 2002.

"It cannot be put into words what Cory has meant to us and meant to this program over the past four years. He has been a great inspiration for all of Sun Devil Nation and there is no other young man who is more deserving of this honor than Cory." — former head baseball coach Tim Esmay