This is Sun Devil Men's Golf

Since joining the Pac-10 in 1978, no team has won more league titles than Arizona State men's golf with its dozen championships. With history that dates to 1931, the Sun Devils have claimed two NCAA team titles, six NCAA individual titles, three U.S. Amateur champions and the first two-time winner of the Ben Hogan Award. The program has produced amateur and professional stars such as Phil Mickelson, Paul Casey, Jeff Quinney, Alejandro Canizares, Jon Rahm and Billy Mayfair who continue to shape the world of golf at all levels.

With players like Phil Mickelson, Matt Jones, Jon Rahm, Pat Perez and Paul Casey producing on the PGA Tour, new head coach Matt Thurmond, the 2009 National Coach of the Year, has a program in place that has incredible tradition.

This is Sun Devil Men's Golf.

Located on the southwest corner of the player practice driving range on Rural Road, the player practice and instructional facility serves as the home of Sun Devil men's and women's golf teams. The building includes "Hobbs House" (named after Bob and Karen Hobbs and family, who were major contributors to the clubhouse). Inside the facility is a large player facility room, which has a state-of the-art video analysis system, a study area and a team meeting room. In addition, the building also has locker room facilities for both the men's and women's teams and satellite offices for both head coaches.

Originally built in 1963, Papago Golf Course was one of the original Valley golf courses and has been an asset to the Phoenix public-golf community. Arizona State, in partnership with the City of Phoenix, will revitalize the course and build a state of the art club house. Papago Golf Course will become the home golf course for Arizona State's nine-time NCAA Championship winning golf programs. Until a master plan is in place for the athletics district, Karsten Golf Course will remain open and there is no timetable in place yet in regards to closing the golf course. ASU will also retain the golf practice facility on campus so it is close to Sun Devil Athletics facilities and classes for the student-athletes.

Many professional golfers are proud to say they were a Sun Devil. These include legends like Phil Mickelson, who has won four major championships and more than 40 events on the PGA tour, Billy Mayfair, who has won five PGA events and became the first player to beat Tiger Woods in a playoff on the PGA tour, and Sun Devil record holders Paul Casey and Alejandro Canizares. Other recent Sun Devils on the tour include Pat Perez (2009 Bob Hope Classic winner), Matt Jones (more than $9 million earned on PGA Tour), Jeff Quinney (2000 U.S. Amateur Champion) and Chez Reavie (2001 U.S. Public Links), and of course Jon Rahm who earned more than $1 million in his first season. Arizona State in the 2016-17 PGA TOUR season earned more than $20 million dollars, the most by any university.

Jon Rahm provided a glimpse of the future at the 2015 Waste Management Phoenix Open, and then followed that up in the summer of 2016 by earning more than $1 million on an abbreviated schedule. Rahm notched his first PGA Tour title with a win at the Farmer’s Insurance Open and his first European Tour victory by winning the Dubai Duty Free Irish Open by six strokes in 2017. The two-time Ben Hogan Award won 11 times in college. 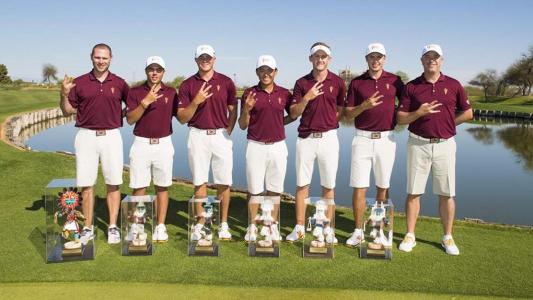