This is Sun Devil Volleyball

Sun Devil volleyball began in 1973 and opened its program with a 21-0 record and an AIAW Championship under storied Arizona State coach Mary Littlewood. In its 45 seasons, ASU has made 18 NCAA Tournament appearances, the latest coming in 2015. Volleyball has two AIAW Championships (1973, 1974) and reached the NCAA Sweet 16 in consecutive years (94-95). Individually, ASU has six AVCA All-Americans in its history and leads the Pac-12 Conference with the most All-Academic nods, with 81 (including six in the 2018 season). ASU volleyball has had Olympians pass through its program and former greats who still own the highest marks in Pac-12 and NCAA records.

Volleyball has a long tradition of its cancer awareness week where the student-athletes, coaches and staff wear pink during a weekend homestand. A new tradition for the volleyball program, ASU brought back its victory bell. Following a victory, the bell is brought on the court to be rung by elected Sun Devil athletes who helped make the victory possible. The team also participates in “Green Matches” in which they team up with ASU environmental efforts to have a completely sustainable match. At the onset of the 2017 season, Sun Devil volleyball established a team moniker entitled, ‘FIGHT’. The acronym encompases values important to the program’s culture, including: Family, Integrity, Gratitude, Humility and Training culture. 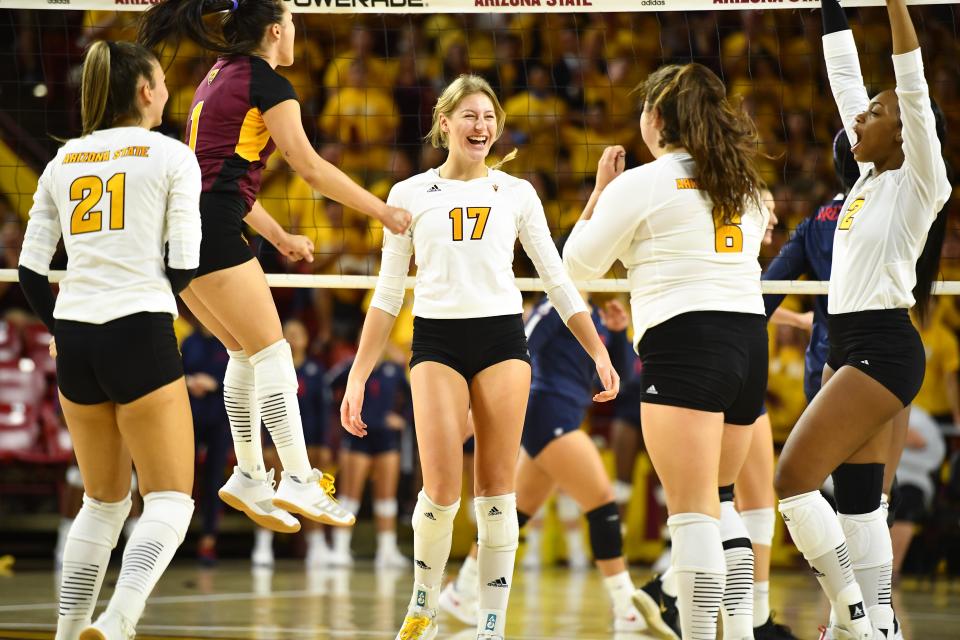 The Sun Devils had the best season under head coach Sanja Tomasevic in her third season. They finished the regular season with a 17-14 record, 9-11 in the Pac-12 to take eighth place, the best finish since 2015. Since joining the Pac-12 in 1986, this season marks the 11th nine-win Pac-12 season for ASU, the first since 2014. In the past 19 years, it is just the fourth time reaching nine conference wins. Arizona State had season sweeps over Oregon, Oregon State, Washington State and in-state rival Arizona. The Cougars, who made the NCAA tournament, were ranked in both matchups this year for the Sun Devils' biggest wins. In the Territorial Cup matches, ASU beat Arizona in both matches for the first time since 2007. For the season sweeps over the Oregon schools, Arizona State achieved that for the first time since 2002. 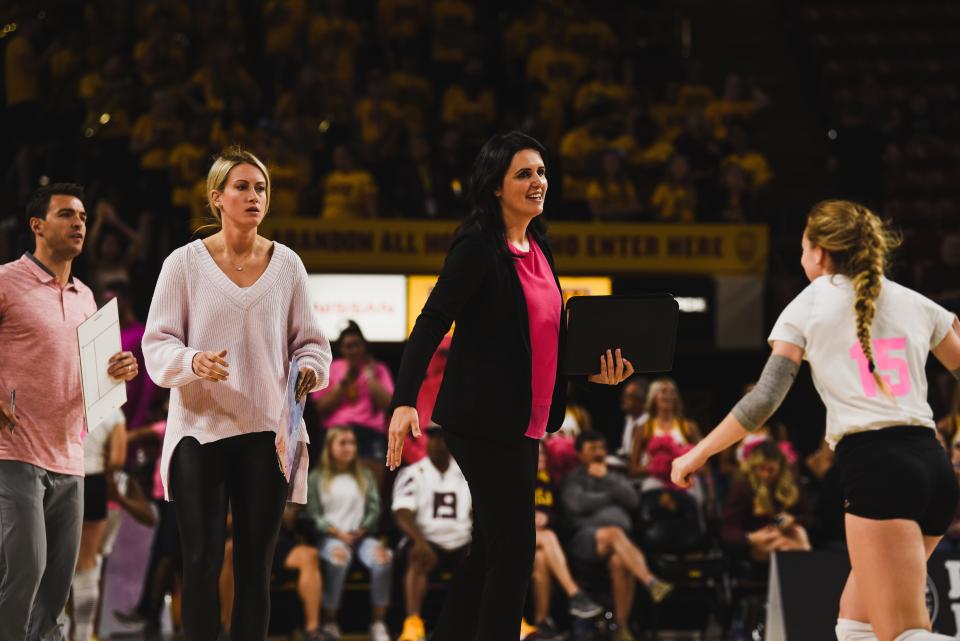 Built on a firm foundation of academic excellence and superior athletic performance, the Conference ushered in a new era on July 1, 2011, officially becoming the Pac-12 Conference with the additions of the University of Colorado and University of Utah.

Just 27 days after the Conference officially changed its named, Commissioner Larry Scott announced the creation of the Pac-12 Networks on July 27, 2011, solidifying a landmark television deal and putting the Conference on the forefront. The Networks, including one national network and six regional networks, in conjunction with four of the nation’s largest cable operators, marked the first time a U.S. collegiate conference or any other programmer has launched a collection of networks across a variety of platforms, rather than a sole network. In addition, the “TV everywhere” rights will allow fans to access coverage outside the home on any digital device, including smartphones and tablet computers.

Built on a firm foundation of academic excellence and superior athletic performance, the Pac-12 Conference renewed its undisputed claim as the Conference of Champions® in 2016-17, becoming the first conference to win 500 NCAA Championships. Beyond the court’s and fields, the Pac-12’s accomplishments extend into the classrooms across 12 campuses, and outside its traditional geographic footprint into new corners around the world.

For the 12th-consecutive year, the Pac-12 had the most or tied for the most NCAA titles of any conference in the country, winning at least six every year since 2000-01. No other conference has won double-digit NCAA crowns in a single year, the Pac-12 doing so nine times, including a record 14 in 1996-97.

Spanning over a century of outstanding athletics achievements, The Pac-12 has claimed 501 NCAA Championships (297 men’s, 174 women’s, 30 combined), nearly 200 more than the next league. It was also the first to win 400 championships then surpassed 450 when Colorado and Utah joined the league in 2010-11.

Pac-12 members have won 297 NCAA team championships on the men’s side, 74 more than the next-closest conference. Men’s NCAA crowns have come at a phenomenal rate for the Pac-12 - 16 basketball titles by six schools, 54 tennis titles, 47 outdoor track & field crowns, and 28 baseball titles. Pac-12 members have won 25 of 47 NCAA titles in volleyball, 43 of 48 in water polo, 30 in skiing, and 24 in swimming & diving national championships.

On the women’s side, the story is much the same. Since the NCAA began conducting women’s championships 36 years ago, Pac-12 members have claimed at least four national titles in a single season on 26 occasions, including a current streak of 17-consecutive years, dating back to 2000. Overall, the Pac-12 has captured 174 NCAA women’s titles, easily outdistancing the SEC, which is second with 100. Pac-12 members have dominated a number of sports, winning 23 softball titles, 23 tennis crowns, 15 volleyball titles, 18 of the last 28 trophies in golf, and 15 in swimming & diving.

Pac-12 women student-athletes shine nationally on an individual basis, as well, having captured an unmatched 743 NCAA individual crowns, an average of over 20 championships per season, including 30 in 2016-17. 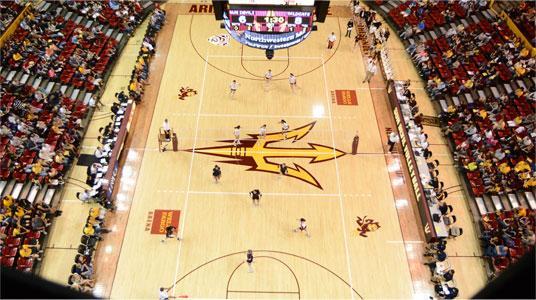 Desert Financial Arena, the home for Sun Devil men's and women's basketball as well as volleyball, gymnastics and wrestling, is one of the nation's finest collegiate arenas.

Constructed in the spring of 1974 at the cost of $8 million, the 14,198-seat facility also plays host to graduation ceremonies and a variety of concerts and shows.

Desert Financial Arena plays host to volleyball’s Marriott Invitational during the nonconference slate each season, averaging around 2,700 visitors during the weekend.

The structure is 400 feet long, 340 feet wide and six stories high. The structure contains offices and locker rooms for volleyball, along with space for weight training, a training room and an equipment room.

A recent addition to Desert Financial Arena was a multimillion-dollar center-court hung video scoreboard. The scoreboard offers the best in modern technology and gives ASU one of the best scoreboards in college athletics. The video scoreboard comes complete with four - eight foot by 12 foot visual display screens. In additions to the scoreboard, two White Way matrix scoreboards with up to the minute game statistics were installed on the east and west side arena walls.

Arizona State Athletics offers a plethora of opportunities for student-athletes to excel while at ASU and to prepare for career upon graduation. The Office of Student-Athlete Development has 11 full-time employees to assist student-athletes with academics, eligibility and life skills. ASU’s Student-Athlete Advisory Committee (SAAC) is an organization that enhances the collegiate experience by providing educational, leadership and service opportunities that exemplify and exhibit the spirit and essence of the Sun Devil student-athlete. All activities encompass this vision and help to further maximize human potential in the pursuit of comprehensive excellence.

ASU has eight full time sports performance coaches that oversee all 22 programs for the Sun Devils. Working closely with volleyball and the sports performance coaches, the sports medicine staff also ensures that all Sun Devil athletes are healthy. Graduate Assistant athletic trainers work with the volleyball team, along with the assistance of the full time sport medicine staff and team doctors that are present at every home event.