For four-straight seasons in 2016, 2017, 2018 and 2019, Sun Devil women’s triathlon has dominated at the USA Triathlon Women’s Collegiate Triathlon National Championships in their first four years of competition [Story]

One of the newest varsity sports at Arizona State University, women’s triathlon was added by the NCAA as an emerging sport for women in 2014 and is continuing its development to become a fully sponsored NCAA sport. Arizona State University is the first in not only the Pac-12 to add women’s triathlon, but the first Power Five Division I University in the country to do so. Sun Devil Athletics was one of 10 NCAA departments to receive a multi-year Women’s Triathlon Emerging Sport grant from the USA Triathlon Foundation. The grant was created to drive the establishment of NCAA women’s varsity triathlon programs. Triathlon is currently 10 schools away from becoming an NCAA Championship sport – more info here.

The mission of Sun Devil Triathlon is not only to foster academic and athletic growth for our student-athletes, but also support Olympic dreams. Triathlon was added to the Olympic roster in 2000, Sydney, Australia. As the sport of triathlon develops as an NCAA sport, Sun Devil Triathlon hopes to lead the charge as a bridge from Junior Elite racing (19 and under) to Elite Level International Competition.

Holding true to our mission, Sun Devil Triathlon has had representatives racing for their home countries at World Championships every year since its inception. The student-athletes compete for their home country outside of the collegiate racing season at International Triathlon Union events in order to score points and increase their world ranking with the eventual goal of representing their country at continental, world championships and major games. There are three tiers of racing: Continental Cups, World Cups and the World Triathlon Series. Competitors placing in the top 20 at these events earn points that contribute to their world ranking. Currently, nine of our Sun Devils have a world ranking. For more information click here.

Since its opening in 1981, the Mona Plummer Aquatic Center is regarded as one of the nation’s finest outdoor swimming and diving facilities. The aquatic center consists of three pools: an Olympic-sized 50-meter by 25 yard competition pool; a 25-yard, 18’ deep diving well; and 25-yard eight-lane warm-up pool. Other amenities include three platforms, four springboards, moveable bulkhead and team room. With seating for over 1,000 spectators, the facility was revitalized with a $1.2 million renovation in 2012.

The annual Arizona Ironman competition is held at Tempe Town Lake each year, as well as the 2017 USA Triathlon Collegiate National Championship..

The stadium, which opened in time for the 1976 season at an estimated cost of $3 million, has served as the host site for several of the top meets in the nation, including the annual Sun Angel Track Classic, and many conference championships. Prior to the 2008 season, Joe Selleh Track was resurfaced with the latest Mondo product, Mondotrack FTX, giving the venue that has hosted numerous world-class athletes a world-class running surface. The venue includes nine 48-inch lanes, dual long and triple jump runways, three throwing areas, and two high jump pits. The shot put area also has two competition rings. The seating capacity at Sun Angel Stadium exceeds 5,000.

There is an extensive network of trails in and around Tempe at nearby Papago Park and throughout the Sonoran Desert habitat. The desert trails are smooth, providing a great place for running and biking. 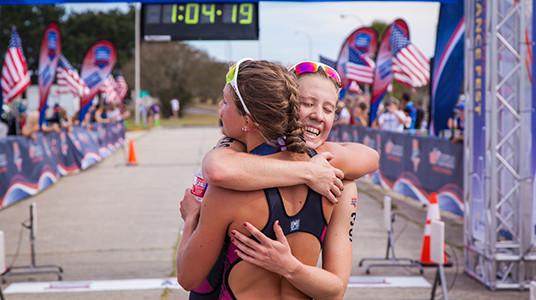 With 20 years of elite-level triathlon coaching experience, head coach Cliff English lead the Sun Devils to National Championship titles each season of the programs’ existence for back to back to back wins in 2016, 2017 and 2018.

Prior to the inaugural season of women’s triathlon at Arizona State University, English, a long-time professional coach and former National Team coach for both the US and Canada, has racked up an impressive resume of coaching top professional ITU, non-draft and Ironman athletes around the globe as well as age group amateurs.

Outside of the collegiate scene, two-time USAT Collegiate National Champion and Sun Devil Hannah Henry was one of six Canadian triathletes to earn a nomination to compete at the Lima 2019 Pan American Games. The Pan American Games qualification is the first of Henry's career, and the selection is based off her performances at multiple events in the spring of 2019. The Canadian was a part of the first-ever Canadian team to podium in the mixed relay at the Pan Ams, taking silver in the effort. The Victoria-native was also a driving force at the 2017 Canada Summer games and will look to continue her dominance in Peru in July 2019. Full Story

In November 2017, following back-to-back national championships, Sun Devil triathlon was invited to National Champions Day at the
White House. Alongside a White House visit, the travel party also visited the U.S. Capitol where they visited Arizona Rep. Kyrsten Sinema’s office, the Smithsonian Air & Space Museum and the Library of Congress, as well as attending the National Symphony at the Kennedy Center and going on a tour of national monuments.