This is Sun Devil Hockey

On Nov. 18, 2014 Arizona State announced the addition of men’s ice hockey as a varsity sport, becoming the 60th hockey program to join the NCAA. The historic move became a reality thanks to hockey supporters Don and Chris Mullet, who contributed $32 million, the largest donation received in athletic department history. The team played in its inaugural NCAA hybrid season in 2015. The 2016-2017 season marks the first full-time Division I opponent schedule. 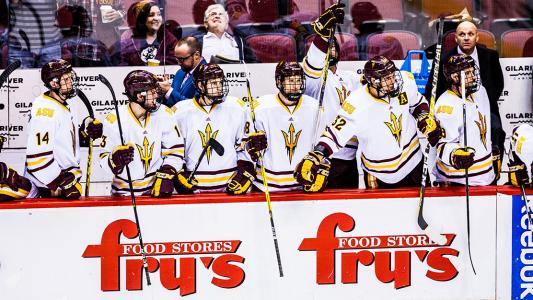 ASU is the first school from a power-five conference to jump to the NCAA level since Penn State in 2012 and remains the only Division I hockey team on the West Coast. The inauguration of Sun Devil Hockey has tipped the domino in generating interest in expanding collegiate hockey in the West.

“Be the Tradition means everything to me. We are really instilling in our players that everything they do both at the rink and in the community needs to revolve around leaving this program better than they found it. Everyone in this program has a blank canvas to leave their mark on and everything we do everyday directly translate into make this program elite, which is what everyone’s expectations are for Sun Devil Hockey.”

Oceanside Ice Arena opened in 1974 and has been home to Sun Devil hockey since its inception in 1985. Known as one of the coldest rinks in the country, Oceanside offers a colorful history of hockey in the desert.

Several factors combined truly make Oceanside one of the coldest rinks in the country. Some say the extraordinary cold is caused by the extreme temperature differences between the weather outside and the temperature inside the rink. The main science behind the cold is due to a low ceiling and energy efficient block wall construction.

The Arizona Coyotes moved to Phoenix in 1996 and used Oceanside as a practice facility for their first two seasons. The Coyotes have made a home at Gila River Arena in Glendale, Ariz. and continue to return the favor to Sun Devil Hockey, who will host four NCAA Division I games throughout the 2016 season at the NHL facility.