This is Sun Devil Water Polo

Despite being one of the newer sports on campus at Arizona State, the Sun Devil water polo program has established itself as one of the elite programs in the nation. A consistent top-five team over the past seven seasons, the Sun Devils are now a program mentioned in the same breath as perennial powerhouses such as Stanford, USC, UCLA and Cal advancing the program’s first NCAA Tournament in 2014 and taking fifth overall. In 2016, the Sun Devils won a school record 26 games en route to their second-ever NCAA Tournament berth, finishing the weekend with a 2-1 record good enough for a fifth place at the NCAA Championships. ASU has won at least 15 games in seven consecutive seasons, including four campaigns of at least 20-wins. Finding the perfect blend of exceptional talent from within the United States combined with some of the top young water polo players from around the world, head coach Todd Clapper has built a program that is diverse, successful and exciting to watch. 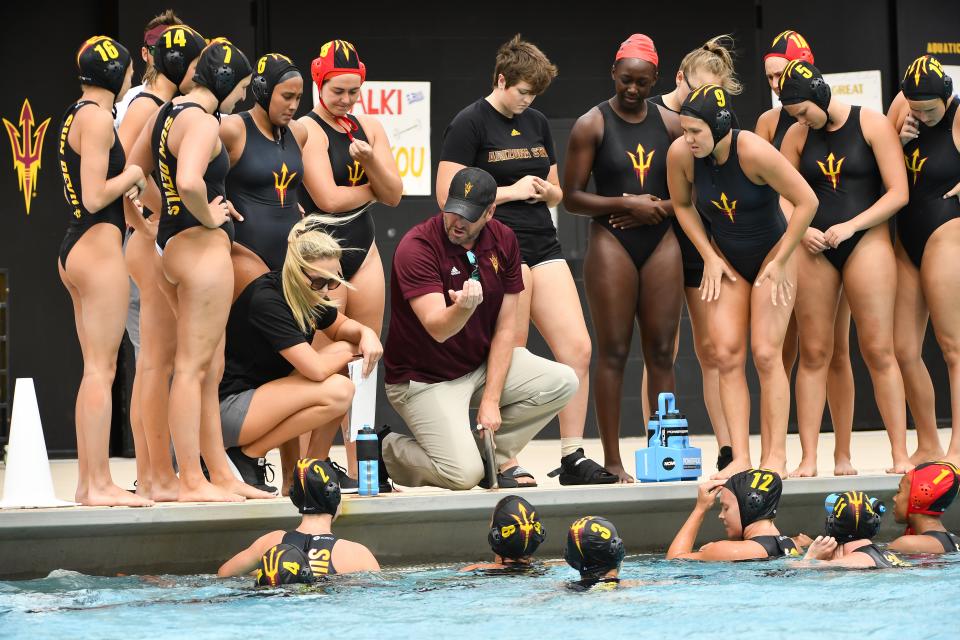 In the heart of the Downtown Tempe campus, the Mona Plummer Aquatic Center is considered one of the finest outdoor swimming and diving facilities in collegiate sports across the country. Three pools cover the deck: an Olympic size, 7-foot-deep competition, and smaller warm-up lap pool. It was built in 1981 and can seat 2,000 spectators.

The facility was named after the late Plummer in 1985 due to her overwhelming amount of achievements and contributions to the school. Plummer coached 22 years and mentored many Olympians and dozens of All-Americans. She earned National Coach of the Year in 1979 and led the Sun Devils to eight national titles.

The Sun Devils have established themselves as one of the elite teams in the country over the past decade. In the last seven seasons, the Sun Devils have compiled an 148-56 record under head coach Todd Clapper. In that time, the team has posted 25 All-America honors, including matching a program-best four selections in 2017, 2016, 2014, and 2013. The program also captured the first victory over UCLA in program history, beating Cal on the road for the first time ever and matching a program best upset with a victory over second-ranked USC in 2014.

ASU advanced to the NCAA Tournament for the first time in program history in 2014, taking fifth overall with a victory over UC Irvine. In 2016, the Sun Devils won a school record 26 games en route to their second-ever NCAA Tournament berth, finishing the weekend with a 2-1 record good enough for a fifth place at the NCAA Championships. The Sun Devils posted a program-best fourth-place finish in the MPSF Championships and CWPA Final Coaches Poll in 2013 (peaking at a program best No. 3 in the 2013 regular seasons). Arizona State won 20 games in back-to-back seasons for the first time in program history in 2012-13, matching the feat shortly after in 2016-17.

A History of Success

Since becoming a program in 2001-02, the Sun Devils have posted 38 ACWPC All-America honors, over 35 MPSF Athlete of the Week selections and three Olympians. The Sun Devil Water Polo program has made the NCAA Championships twice in school history (2014, 2016), finishing in fifth place in both appearances. ASU has had an All-American in each of the last 13 seasons, including a matching a program-best four selections in 2013, 2014, 2016, and 2017. ASU has compiled an overall record of 141-58 (.709) in the last seven seasons. The Sun Devil program had two representatives in the 2012 London Olympic Games in former standouts Ao Gao (China) and Rowie Webster (Australia). Recent Sun Devil alum Izabella Chiappini was part of the Brazilian National Team that competed in their home country at the 2016 Rio de Janeiro Olympics. Additionally, 2018 graduate Alkisitis Benkou was part of the Greek National Team in their preparation for the 2016 Olympics, skipping the 2015-16 NCAA season.