This is Sun Devil Tennis

The Sun Devil women’s tennis program is known for their athletic achievements and unparalleled success academically. Head coach Sheila McInerney holds the most wins in program history with 463 and has had 23 athletes garner a total of 49 All-American honors under her direction. Under McInenery, the Sun Devils have made 30 out of 31 NCAA postseason appearances including a string of 28-consecutive appearances, the longest active streak in Sun Devil Athletics.

This is Sun Devil Women's Tennis from Arizona State University on Vimeo.

The Sun Devils finished the 2015 season ranked No. 27 in the nation with a record of 15-8 and earn their 28th-straight NCAA appearance with a trip to the Oklahoma State Regional. Junior doubles team Desirae Krawczyk and Stephanie Vlad reached the round of 16 at the NCAA Individual Championships in Waco, Texas finishing out the year ranked No. 19. NCAA Pac-12 Second Team All-American, Desirae Krawczyk, excelled at the No. 1 singles spot for the Sun Devils in her junior season earning an overall record of 21-7 and 15-5 in dual-match play. Her most notable victory came in a three set match against No. 1 ranked Robin Anderson of UCLA. Krawczyk finished off her singles season ranked No. 40. 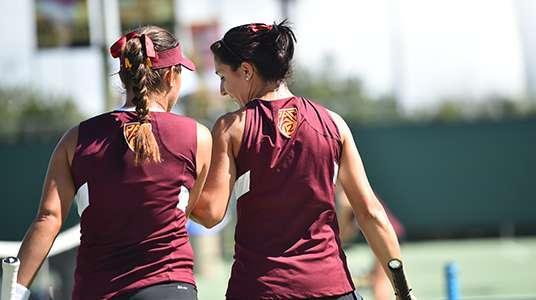 Arizona State Athletics offers a plethora of opportunities for student-athletes to excel while at ASU and to prepare for career upon graduation. The Office of Student-Athlete Development has 12 full-time employees to assist student-athletes with academics, eligibility and life skills. 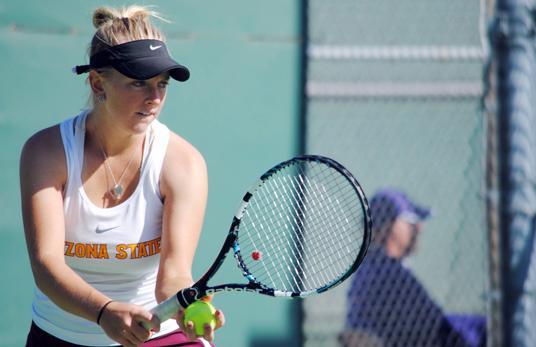 ASU’s Student-Athlete Advisory Committee (SAAC) is an organization that enhances the collegiate experience by providing educational, leadership and service opportunities that exemplify and exhibit the spirit and essence of the Sun Devil student-athlete. All activities encompass this vision and help to further maximize human potential in the pursuit of comprehensive excellence.

The Arizona State women’s tennis program has continuously exceeded national standards academically and has set precedence for academic excellence within Arizona State, the Pac-12 and the NCAA. In 2015, the NCAA recognized the Sun Devil tennis program for recording an Annual Progress Rate (APR) that ranked in the top-10 percent nationally.

Since the debut of the APR, Coach McInerney’s program has recorded 10-straight years of a perfect score of 1000 or 100 percent. Sun Devil tennis is one of 15 NCAA Power Five programs in the country and the only Pac-12 school to record perfect APR scores since its inception.

Women’s tennis was not recognized as intercollegiate until the 1960’s. Despite that fact, the Territorial Normal School (now Arizona State) added women’s tennis as a recreational activity in 1898 and is the only sport that has been played continuously through the history of Arizona State.